Operations and Maintenance is Responsible for:

Links to Other Agencies 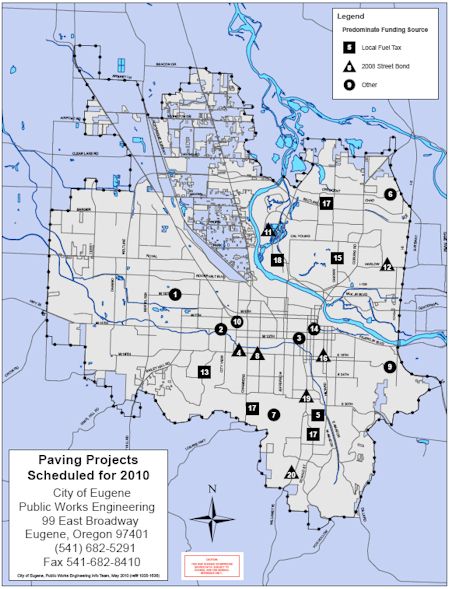 Streets whose primary function is to provide access to individual properties. Typically, they carry fewer than 1,500 vehicles per day. Eugene has approximately 395 miles of local or "neighborhood" streets.
For more information on street classifications in Eugene, see the Arterial and Collector Street Plan.

A street that is not constructed to City standards. Unimproved streets (and alleys) include gravel streets, oil mat streets, and streets that lack engineered road beds or drainage systems. Approximately 12 percent of Eugene’s 562-mile street system is unimproved, with most of the unimproved streets in the local or "neighborhood" street category.

The portion of the street in which vehicles operate. Typically, travel lanes are 10 to 12 feet wide. The paved surface of the travel lane is called the driving course or top lift.

The following terms are generally used to describe paving defects, ranging from least serious to most serious.

This is the first stage of street degradation, caused by weather (UV rays, oxidation, and expansion/contraction due to heating/cooling) and/or traffic (including wear from tires and studs). Fine particles are lost from the upper layer of asphaltic concrete, loose gravel may be present, and the surface appears rough.

Also known as longitudinal cracking, this condition is typically caused by surface compression due to vehicle weight and motion. Cracks allow water to penetrate the surface, leading to more significant deterioration.

Usually caused by higher weight vehicles such as trucks and buses, which deflect the pavement surface and also can compress and distort the road base by "pumping" the underlying materials and creating subsurface voids.

If vehicle movement and/or water cause the top layer of asphalt to slough away and expose the subgrade or the road bed, the resultant condition is commonly called a pothole. Once the subgrade or road bed has been disturbed, the road is considered structurally failed. 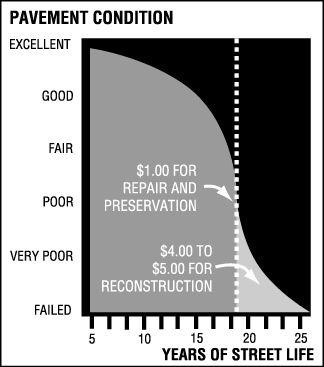 Pavement Condition Index, used to rate the condition of streets on a scale of 0 (very poor) to 100 (excellent). (see also photos of PCI ratings)

The computerized system used by the City of Eugene Public Works Department to record data and generate reports about the city’s streets and their condition.

The work done to preserve and extend the life of transportation system components. While maintenance work does protect road surfaces, the term "preservation" usually is applied to more extensive repairs such as rehabilitation and reconstruction.

Several techniques are used to repair streets, ranging from least expensive to most expensive: