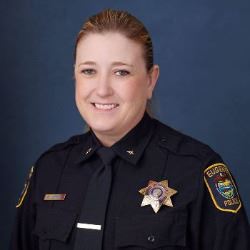 Deputy Chief Jepson has a notable 23 years of experience encompassing many different areas of policing. She comes to Eugene from Hillsboro Police Department. During her tenure there, Jepson moved up the ranks from police officer, to sergeant, lieutenant and then commander of patrol operations. Jepson has a strong operational background and has been instrumental in building teams such as Street Crimes, Interagency Gang Enforcement Team, and the regional TriMet team.

Before working for Hillsboro, Jepson worked for 19 months as a police officer for Sherwood Police Department in Oregon. She grew up in Springfield, Oregon and went on to school at Western Oregon University where she played basketball and later coached, and Lane Community College where she was on the basketball team.