The Park Blocks, Eugene’s central public space, did not always look the way it does today. Take a look at the evolution of Eugene’s Town Square since the mid-1800s.

Over 150 years ago in 1856, Eugene and Mary Skinner and Charnal and Martha Mulligan each dedicated a portion of their land to create a unifying public square for the new community. This public square was not divided by streets. It served as a focal point for the surrounding properties. Businesses opened onto the square, and eight alleys provided connections to the community resource. 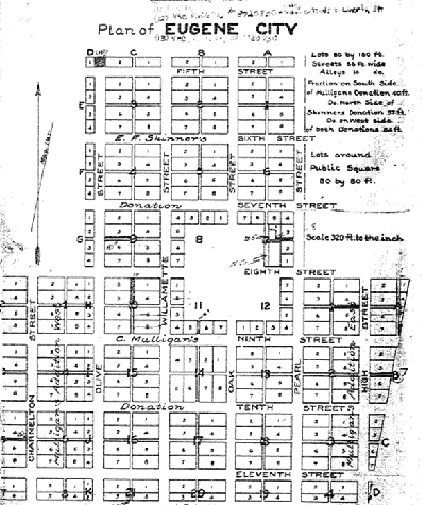 In 1895, the large square was divided into four blocks, as 8th Avenue and Oak Street were cut through. At this time, the two blocks on the north side of 8th Avenue were used for the city hall, county jail, and courthouse.

Historic maps suggest that a change occurred on the southern blocks between 1895 and 1898. The block labels shifted from plaza (see map) to park which suggests the areas changed from paved surfaces to more plantings. The shift from calling it a park in 1898 indicates that some of the paved areas were probably converted into lawns and trees.

In the early 1900s the Park Blocks were used for casual, everyday encounters. The edges were porous, allowing people to enter the park from any side, and there were clear line of site across the blocks. 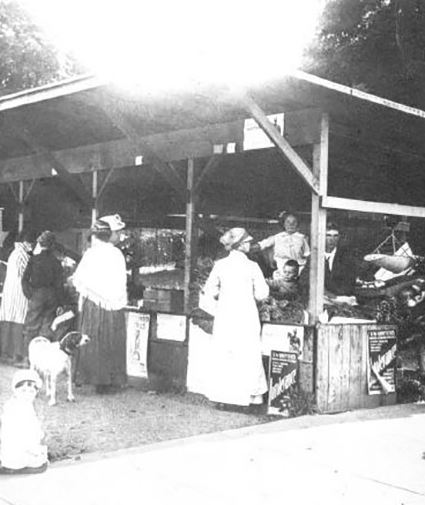 Mid-1900s: Becoming the Core for Commerce

In the 1930s the Eugene Cottage was renovated to reflect the growing needs of the city.

By the 1950s (see map), the Park Blocks became surrounded with businesses, becoming the core for commerce. Nearly 50 ground floor businesses had immediate park frontage including 28 retail stores, five restaurants, nine banks and professional offices, and two hotels. The alleys continued to provide additional connections to the surrounding streets. By this time a portion of the northwest block was already being used for parking.

In 1957 that northwest block became the site of the Butterfly Lot. The following year, Lloyd Bond completed his design for the two Park Blocks south of 8th Avenue. The Modernist design has been compared to the work of abstract paintings such as Piet Mondrian’s 1943 “Broadway Boogie Woogie.” 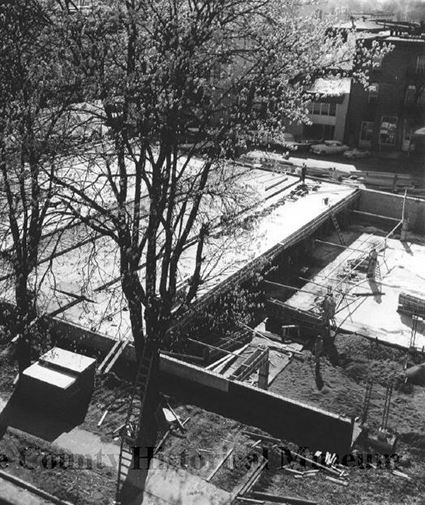 Though the Park Blocks have seen slight changes since 1958 to make the area safer, more open, and more bicycle friendly, it remains largely the same.

The Town Square Project will take into account all of this history as it considers the best ways to meet the needs of today’s users: a place for people. 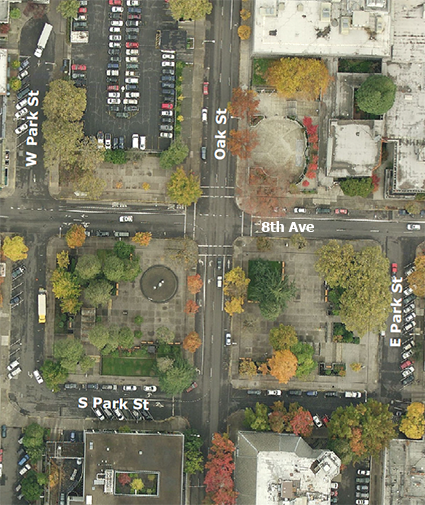