The 2010 Community Climate and Energy Action Plan (CEAP) has guided a number of City, community-based, and local partner agency efforts. As part of the direction from City Council in 2016, the City identified updating the CEAP as an organizational priority in 2018. As a result, staff began work on a CEAP progress report and a draft of a new Community Climate Action Plan (CAP2.0).

A draft of the updated City of Eugene Climate Action Plan 2.0 was completed November 2019. City staff spent the following 7 months editing the document guided by recommendations from the Mayor’s CRO Ad Hoc Work Group and community input. A draft was released July 6, 2020, with an updated draft published July 23, 2020. The final version of the updated CAP 2.0 was approved July 2020.

The focus of the CAP2.0 is to continue to foster the actions of the City, as well as our community’s agencies, companies and organizations, in moving toward: 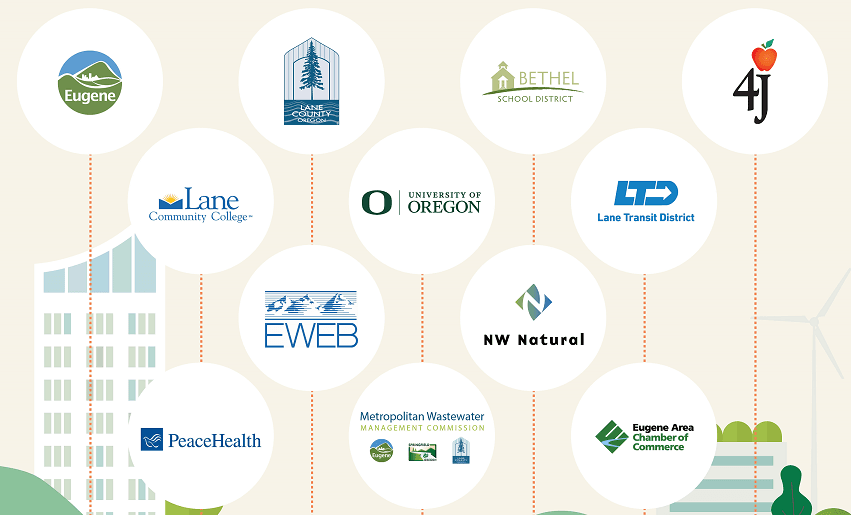 The CAP2.0 focuses on engagement with systems-level actors, or the Eugene Climate Collaborative Partners (ECC Partners).  ECC Partners are specifically defined as organizations who have significant oversight and impact on community-wide fossil fuel use and emissions or have the ability to affect or alter systems that will enable the community to adapt and prepare for climate change. By starting with the ECC Partners, the CAP2.0 lays the foundation to make it easier for everyone – individuals, households, businesses, and other organizations – to take actions that support the CRO goals.

ECC Partner staff met two times across six topic areas to share analysis, learn about ECC Partner organization efforts, and share feedback from community outreach processes. Approximately 60 individuals from ECC Partners and the public participated in each round of meetings. During those meetings, the project team shared data and information about the expected future physical conditions in the Eugene area due to the impacts of climate change (see Chapter 2 and Appendix 1) and data around Eugene’s current greenhouse gas emissions trajectory compared to the CRO goals (see Chapter 3 and Appendix 2). ECC Partners shared what their organizations plan to do over the next 5-10 years to address climate change and prepare for a changing climate. The ECC Partner actions are included in Chapters 4 and 5 of the Draft CAP2.0.

Six local organizations participated in the Equity Panel, which met about 10 times between January and June 2019. The City received applications from a variety of groups across the community, which helped ensure the creation of a strong and broadly representative final panel. Each organization on the panel received a $3,000 grant to support their work on the project.

The project team conducted outreach throughout the CAP2.0 process in addition to the ECC Partner engagement. In fall 2018, the project team held two open houses and participated in the City’s Project Planning Fair, Making It Happen, to share the planning process with the community. In summer 2019, the project team participated in the City’s Party in the Park series promoting individual actions that have the most impact on ghg reduction. In fall 2019, the project team held four focus groups, met with the Sustainability Commission and the Local Government Affairs Council at the Eugene Chamber of Commerce, and administered an online survey on Engage Eugene to hear community feedback on the CAP2.0. More than 140 people provided their thoughts on Draft CAP2.0 document and the 12 Additional Strategies through these processes. The report from this portion of the community engagement process can be found here.

Over the course of 2019, City Council considered 12 Additional Strategies to add to Eugene’s CAP2.0 that go beyond the plans and policies already in place.  These strategies provide a pathway for the City to reach the CRO goals.  These actions will be added to the next CAP2.0 draft with the recognition that they each require additional research, policy decisions or funding as next steps. You can see the 12 Additional Strategies here.

In February 2020, the City reconvened the Mayor’s CRO Ad Hoc Work Group to provide additional feedback on the Draft CAP2.0.  You can find more information about the Work Group here.

The CAP2.0 will set out a roadmap of actions our community is taking over the next 5-10 years to help us reach the climate goals in the CRO. Reaching these goals requires a focus on high-impact actions defined as those activities that have the largest ability to reduce Eugene’s ghgs and fossil fuel use.

To understand what high-impact actions are happening in this community, the first stage of the CAP2.0 focuses on engagement with community partners that have larger, system level impacts. These partners make up the Eugene Climate Collaborative (ECC) and are specifically defined as organizations who have significant oversight and impact on community-wide fossil fuel use and ghgs or have the ability to effect or alter systems that will enable the community to adapt and prepare for climate change. These partners were formerly known as the Large Lever Shareholders (LLS).

Staff worked with Eugene Climate Collaborative partners to identify their commitments to address climate change and included those commitments in the CAP 2.0 document.

For the video of the Equity Panel Work Session Presentation to City Council on June 17, 2019 click here.

Six local organizations participated in the City of Eugene’s Climate Action Plan (CAP) 2.0 Equity Panel. The panel’s goal was to capture and elevate the concerns of marginalized communities as they relate to the CAP 2.0, and it met 10 times between February and June 2019.

One representative from each of the organizations will make up the CAP 2.0 Equity Panel. The City received applications from a variety of groups across the community, which helped ensure the creation of a strong and broadly representative final panel. Each organization on the panel received a $3,000 grant to support their work on the project.

The panel had three main tasks:

1) Revising the Climate Action Plan’s Project Equity Lens, which is a tool to help elevate opportunities and concerns around equity issues throughout the project.

2) Identifying general opportunities and challenges for marginalized communities as it relates to climate change in six different topic areas.

3) Providing specific feedback on actions included in the CAP 2.0 as applicable.

The Equity Panel recommendations are currently in draft form and will be available online later this year.

Land Use and Transportation Chapter

City Staff is coordinating the CAP2.0 Project, a community-wide effort to establish how the community is working towards the City’s Climate Recovery Ordinance emission and fossil fuel goals. The public was invited to the following events to learn more about the CAP2.0 Project Plan.

Planning Fair at the Library