Urban Canvas strives to create a vibrant and dynamic public art community in Eugene by providing opportunities for local artists to create murals with local business.

Urban Canvas accepts portfolios from artists of all experience levels, from the experienced muralist to the visual artist wanting to branch out into mural work. With the information and images provided by each artist, we create a portfolio that we show to wall owners interested in commissioning a mural.

Urban Canvas is looking for walls to showcase murals by Eugene’s talented visual artists! If you are a wall owner (or tenant that has permission from the wall owner) looking to add a mural to your building, please fill out a Wall Submission Form Opens a New Window. Opens a New Window. . Be sure to include the location of your wall, approximate dimensions (height and width in feet), and at least one image.

Once we receive your submission, we will share our artist roster with the interested business owner and provide free consultation on the mural process.

Note: We reserve the right to reject wall proposals at any time, for any reason. 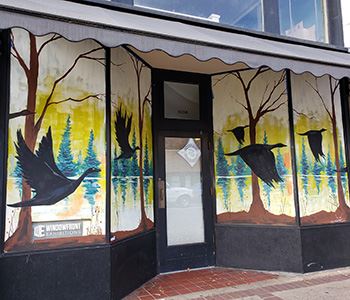 About the artist: My art is always changing, always evolving. I believe that repetition is the mother of perfection so I aim to create as much as I can whenever and wherever I am. I love creating representational art, and currently, I am really enjoying mixing references from real life with images with my imagination. To me, the melange of real with imagined feels like adding my own flavor or lens to life.

Alejandro Sarmiento is an artist who specializes in acrylic painting and drawing. He began his artistic journey at a young age, drawing on any surface he could find and filling his school notebooks with doodles. Mostly self-taught, Alejandro further developed his skills with a few years of formal art training at Lane Community College in his mid-twenties. Today he continues to learn and evolve his craft through daily practice, interacting with other mediums and artists, and independent research of techniques and best practices. Alejandro has created artwork for local and city projects, in both the private and public sectors, including large-scale murals, custom portraits, logos, and collaborative pieces. After eight years of working as a paid professional artist, Alejandro opened his own art business in 2020 where he continues to create commissioned work and teaches art classes for both novice and experienced painters. Artwithalejandro.com

About the art: "Until recently I lived near the Willamette River and enjoyed walking and biking along the paths. This image was inspired by the river in my backyard, and a picture I took of a mallard family where I noticed the ducklings' feet under the water were adorable. I named the mural Make Way, thinking of Spring, younger generations, change, and also the children's book Make Way for Ducklings by Robert McCloskey. He illustrated his own books, and he is one of my favorite visual artists. Alternate title: Waters of March - Águas de Março, a Brazilian song by Antonio Carlos Jobim."

About the artist: Lisa Yu is a painter and assemblage artist originally from Ann Arbor, Michigan. She likes to use re-purposed materials.  Her art celebrates ordinary life, through subject matter, means of exhibition, and media. She thrives on collaboration and works to support social and environmental justice. Since moving to Eugene in 2009 from Chicago, she has taken part in public art projects utilizing various mediums: Upstream Art Springfield, the Umbrella Project, Eugene Storefront Art Project, RainPlay, BRIDGE Exhibitions: Reflections Space River Road/ Santa Clara, murals also facilitated by the City of Eugene, and a mural with children attending camps at Emerald Park. lisayuart.wordpress.com

About the art: “Humility of Narcissus IV is the fourth iteration of the Narcissus design in my own artistic mythology. It amends the ancient Greek myth of the same name, about a young hunter who is very talented and beautiful and lets it goes to his head, and eventually falls in the water of a reflecting pool and drowns because of his self-obsession. In my amendment, the act of falling into the water comes as a shock to him, and he saves his own life by realizing his behavior and seeing himself for the first time from the outside. He is transformed and reborn. At times in my life when I needed to transform, I would paint or repaint this design, and to do so I would have to act it out, which would create a residual art piece. This mural is dedicated to a friend of mine who was present at the inception of this idea. This is also the first mural I can call my own and I really treasure it, having had the pleasure of putting it up in a very nostalgic part of town.”

About the artist: Eleanor Soleil is an emerging transgender artist in Eugene, OR. Her work is intuitive, emotional, and mystical. Through a variety of self-taught painting techniques, she creates transcendent imagery and visions of liberation. Her process is very dynamic; she is always changing her methods and transforming as an artist. Her technique can be described as meticulous and detailed but not static, there is always movement, flux, and depth. Most of her work uses very bright colors and engages the viewer in a sensual way. Her paintings are deeply felt and admired, they can command and immerse and inspire. Wherever they are visible, they draw in viewers, inviting them to another world.

About the art: The intention for Spring Fling was to inspire excitement for life and new beginnings. The trees and flowers spread joy with their new growth and fresh colors.  The red cardinal reappears in mid-flight, with a bold and confident flashing of his wings.  Celebration and renewal are at the heart of this Spring mural.

About the artist: Janene Block, a Eugene local for 35 years, is a professional illustrator and painter whose work inspires a feeling of belonging and connection. She primarily works as a portrait artist, with a heart for creating memorials, but also enjoys painting landscapes and murals. She has designed and painted various mural projects for clients and public programs, including the City of Eugene, Upstart Crow Youth Theatre, and El Camino del Rio Elementary School.  In the past, she has taught art to all ages and abilities, with an emphasis on adaptive environments and student inclusion. janeneblock.com, facebook.com/janeneblockstudios and instagram.com/janeneblockstudios

About the artist: Born in Southern California, David CP Placencia moved permanently to Eugene, Oregon in 2008 to focus on his art practice. 2012 marked his first solo exhibition at a local art gallery and he continues to show artworks, public art and provides art instruction in Eugene religiously since graduating from the University of Oregon in 2013. Teaching and being active in community projects became a large part of his practice. In 2019 he founded WheelHaus Arts, a K-12 art studio/gallery and in 2020 they created a large 40 foot mural at Charnel Mulligan Park. khaostasis.com/ 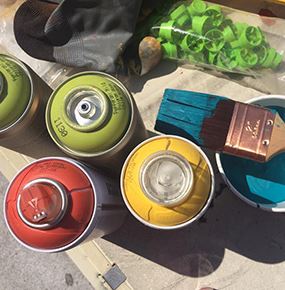