The purpose of this 5-year Strategic Plan (PDF) is to identify a strategy for Eugene to follow in order to achieve the City’s Transportation System Plan goal of tripling the percentage of trips made on foot, by bicycle and by transit by 2035, from 2014 levels and becoming a Platinum Level Bicycle & Walk Friendly Community (BFC & WFC). Eugene is currently certified as a Gold Level BFC and Gold Level WFC by the League of American Bicyclists and the Pedestrian & Bicycle Information Center, respectively.  This plan updates and replaces the 2008 Eugene Pedestrian and Bicycle Strategic Plan, and as such, it is not a regulatory plan and will not be adopted as policy by the Eugene City Council, instead, it will be adopted administratively. It works to support the Eugene 2035 Transportation System Plan (TSP) and will refer to the policies and suggested actions in the TSP throughout. It is also not a capital improvement plan, instead, it is a guide for City staff, community members, and organizations to use as they work toward a common vision and works

The Plan is intended to be used in several ways: 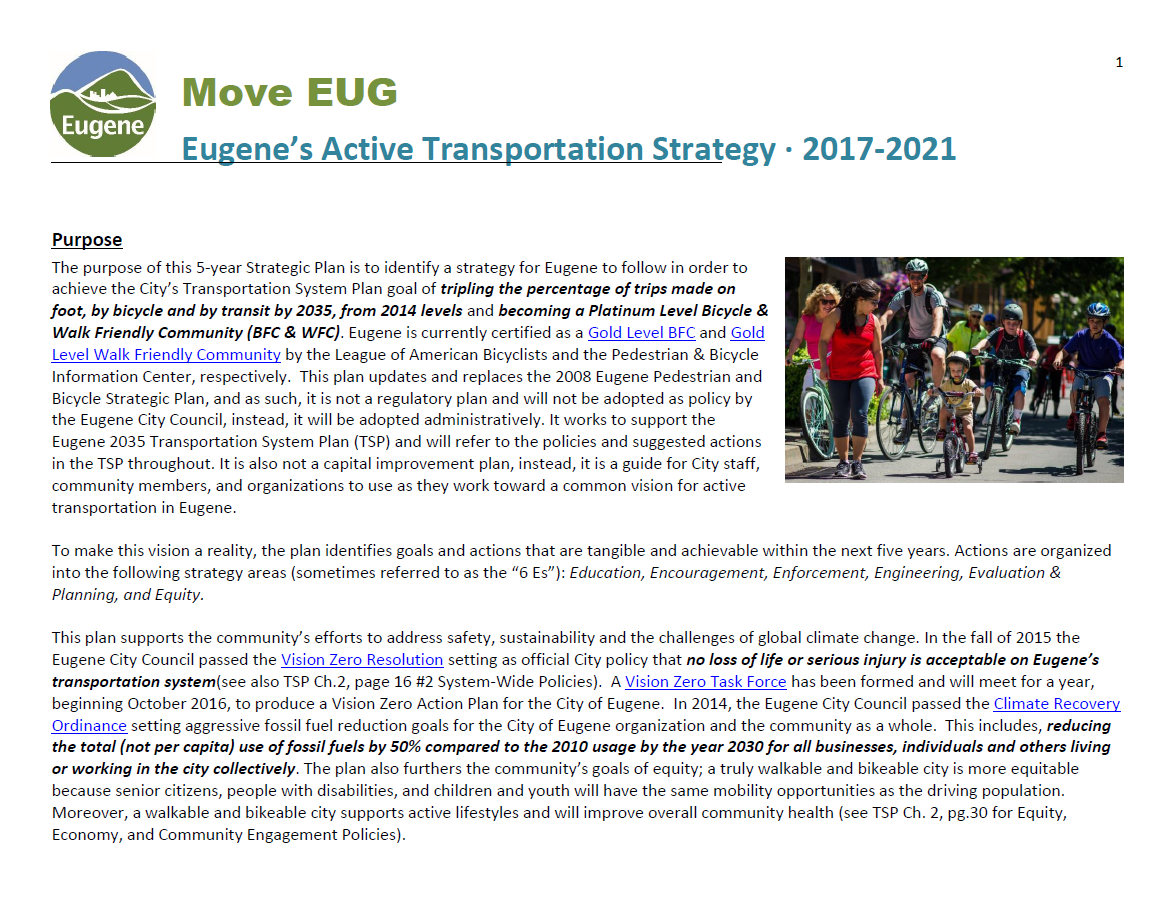 This Strategic Plan articulates an overarching vision for the community and provides a concrete, specific plan of action that will empower and guide the community toward this vision. It is a dynamic plan that relies on broad community participation.

Read more about the vision, goals, and actions of the plan, download the MoveEUG Active Transportation Strategy, or see the annual reports below.

• Vision:
Eugene is a place where walking and biking are integral to the community’s culture, where the city’s livability, independence, economic prosperity and overall quality of life are enhanced by more people walking and biking, and where these modes of transportation are safe, convenient and practical options for everyone.

• Goals:
Goal 1 -  Foster and develop a community culture supportive of walking and biking as important modes of transportation and recreation.

Goal 2 - Increase the share of trips people make by walking and biking for transportation and recreation.

Goal 3 - Increase safety and perception of safety for people who use active transportation.

Goal 4 - Create accessible, efficient and convenient facilities for people who walk and bike to travel to the places where they live, work, and play.

Goal 5 - Build productive partnerships and obtain stable and diverse resources to implement and promote the plan.

This plan has 63 specific, assignable actions for implementing the goals. The actions are broken into five strategies relating to the “Six E’s”: Education, Encouragement, Enforcement, Engineering, Evaluation & Planning and Equity (Equity does not have its own strategy but is included in each of the five other strategy sections). To help guide the implementation of the plan, City staff, the Active Transportation Committee and the community have prioritized the actions into short term (1-2 years), mid-term (3-5 years), long term (5+ years) and continuous/ongoing. The lead and partner organizations that will likely be involved in the action are listed in the first two columns after the action. If the action is related to the TSP, it is listed in the far right column. 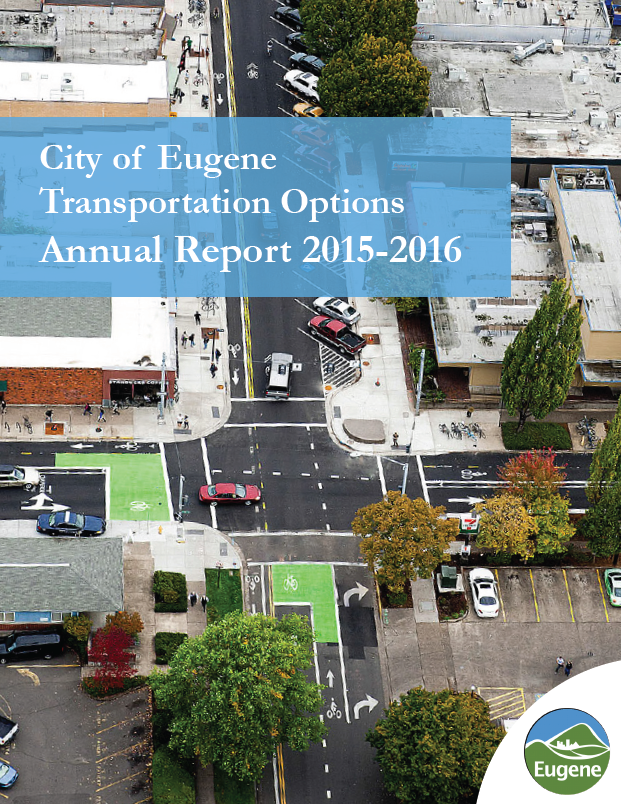 provides a comprehensive overview of accomplishments through

programs implemented throughout 2015 and 2016, along with

major projects and milestones from 2010 until present.

The Active Transportation network in Eugene is constantly growing

due to efforts from the City and the community. This first annual

accomplished in an organized format using the “Five E’s”: 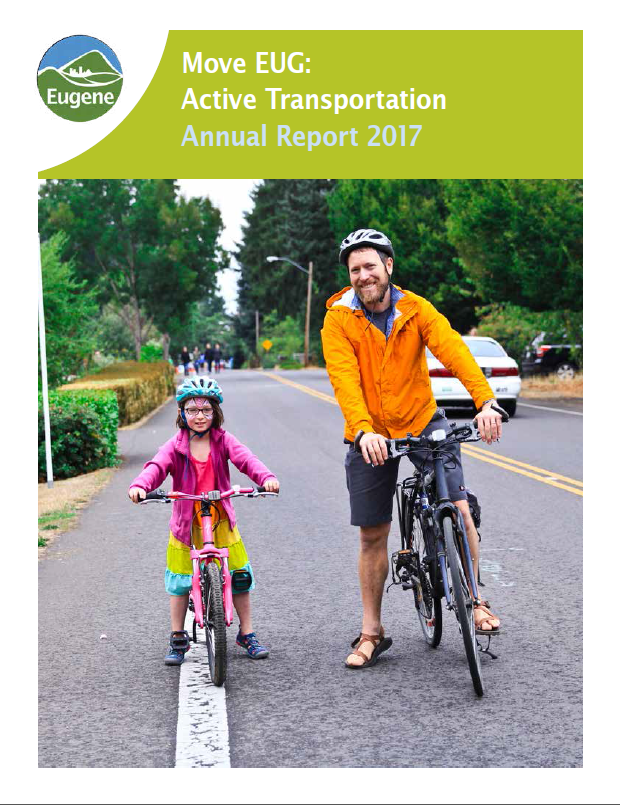 The City of Eugene’s annual Active Transportation Report provides a comprehensive overview of accomplishments through 2017. This report includes a listing of the projects and programs implemented along with major projects and milestones from the previous year.

The active transportation network in Eugene is constantly growing due to efforts from the City and the community. This second annual report is a way for the community to reference what has been accomplished in an organized format relating to the “Six E’s”:

• Equity (Equity does not have its own strategy but is

included in each of the five other strategy sections)