About the Land Supply Maps

As part of Envision Eugene and state regulations for urban growth boundary planning, Eugene adopted a new Urban Growth Boundary (UGB) in 2017 representing how we will accommodate our projected population growth over the next 20 years. The types of development capacity we are counting on is sorted into three categories:

The 2012-2032 Employment and Residential Land Supply maps adopted with the UGB graphically show, as much as possible, the three ways we are meeting our growth over the next 20 years. The maps and much more detail on the land supply, demand and capacity analysis are included in the Envision Eugene Employment Land Supply Study and Residential Land Supply Study, both appendices to the 2017 adopted Envision Eugene Comprehensive Plan. The maps depict the land supply at the city-wide scale as well as in a set of atlas maps. 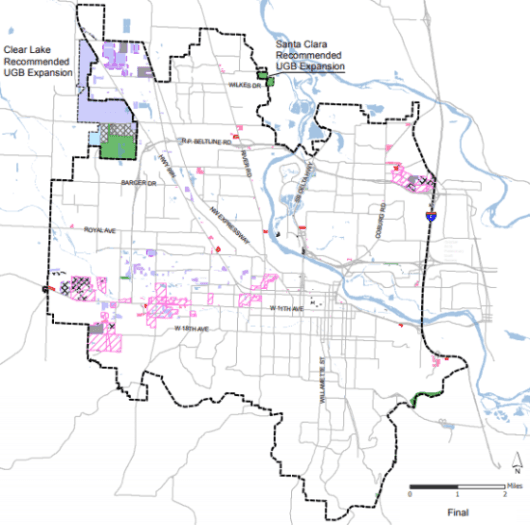 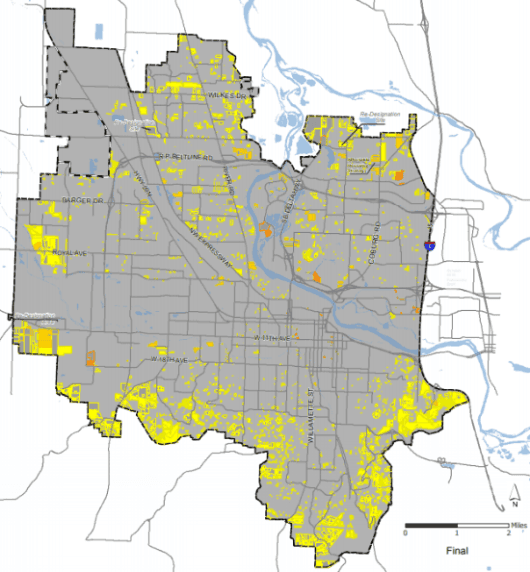 The March 2012 Envision Eugene Draft Recommendation presented the draft land needs projected for housing, jobs, parks and schools over the next 20 years of growth. This included initial estimates on how much capacity we would have under the three ways above, based on 2001-2008 development data. These estimates were updated with additional work based on 2001-2012 data and with adoption of efficiency strategies. The 2017 adoption of a Eugene-only UGB that included an expansion in two areas, completed the 20-year land supply for Eugene.

The Three Parts of Land Capacity

The links below include more detail about the three ways we are meeting our next 20 years of growth as compiled on the adopted 2012-2032 maps.

The existing capacity is a snapshot of the land supply as of 2012, and how much capacity that land had if we took no additional actions to do develop differently (e.g. create new capacity). Staff worked with the TRG (Technical Resource Group) to verify the accuracy of the 2012 updated land supply and capacity analysis:

Part II: New Capacity Inside the UGB
Because we had a shortfall in meeting our full 20 year land needs on our 2012 land supply, we looked at ways to increase the capacity of our existing land supply (efficiency strategies). The following are links to the main actions/projects that the City completed to create capacity for more jobs and homes inside the UGB:

Even after the projects above, we still had a shortfall of land to meet all of our needs. Additional land was added to our land supply by expanding the UGB in two areas to accommodate the remaining shortfall for jobs, parks and schools. These two areas are identified on the 2012-2032 employment land supply maps.