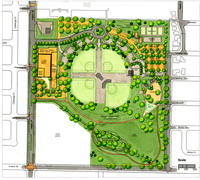 The Eugene Family YMCA approached the City of Eugene Parks and Open Space Division in 2009 with a proposal to expand their services in the Bethel area by constructing and operating a new facility in Bethel Community Park. Given that the Bethel area did not have adequate community center and recreation services, and the City did not have the resources to add those services in the foreseeable future, the Parks and Open Space Division felt the idea merited consideration.

The original Bethel master plan included a future community center of approximately 10,000 square feet which is an average size for city-run community centers which typically serve specific groups (seniors or children or families, etc.) A full-service community center like a YMCA would be closer to 65,000 square feet and would require a significant additional number of parking spaces to accommodate all users. The larger building size and additional parking, if approved, would require an updated park master plan.

As a result, the division agreed to study the viability of the proposal in 2011 by hosting a series of public meetings and web-based surveys to gather public feedback and involve the community in a discussion.

Four public meetings were held between May 2011 and January 2012 in the Meadow View School Caforium and four separate web-based surveys were given during the outreach process. Over 650 community members provided individual responses to these surveys. As a result of staff analysis and public input, a revised master plan allowing for a larger community center that could accommodate the Y proposal was approved.

Now that the updated Master Plan has been approved, staff is working closely with the Y on a park land lease agreement and required land use planning updates. Future developments in Bethel Community Park must comply with a Conditional Use Permit (CUP) currently on file with the City Planning and Development Department. Parks and Open Space staff will work closely with architecture and engineering consultants for the Y to submit an updated CUP application for the proposed improvements.

The YMCA is concurrently raising funds for development. For specific questions about the YMCA, please contact Julie Grossman at 541-686-9622.

Short URL for this page: www.eugene-or.gov/bethelpark