East Alton Baker Park, now officially known as the Whilamut Natural Area (WNA), covers 237 acres of riverfront open space dedicated for passive recreation and habitat restoration. The WNA provides many key features to Eugene’s riverfront park system, including a linkage to Springfield by way of riverside bike paths and open space. Countless volunteer hours have been invested in the park to restore natural habitat by removing invasive vegetation, planting natives, educating the public and helping to direct future management of the park.

A master plan for the Whilamut Natural Area was developed by a coordinated effort which included the Citizen Planning Committee of the Whilamut Natural Area of Alton Baker Park (CPC), Willamalane Park and Recreation District, City of Eugene staff, and community input. Adopted in 1996 by the City of Eugene City Council and the Willamalane Board of Directors, the plan presents key concepts and ideas to shape the park.

The name Whilamut (pronounced "wheel-a-moot) was chosen in collaboration with the Komemma Cultural Protection Association of the Kalapuya Tribe. Whilamut is a Kalapuya word which means "where the river ripples and runs fast." The CPC initiated the renaming of the park, and selected a Kalapuya name as a gesture of honor and respect for the tribal members who hunted, fished, and gathered camas bulbs on the land that is now the Whilamut Natural Area. A traditional Kalapuya naming ceremony was held to commemorate the new name on September 7, 2002. 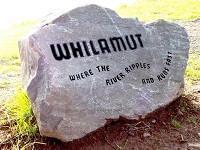 Through a collaborative effort between the CPC, City of Eugene Parks and Open Space Division, and the Willamalane Parks and Recreation District, 11 basalt boulders with Kalapuya word engravings were installed in both the Eugene and Springfield portions of the natural area in the spring of 2003. The final four stones were installed in 2013 during replacement of the Willamette River I-5 Bridge, officially titled the Whilamut Passage Bridge. The stones are each carved with a Kalapuya word and the English translation. For example, the Kalapuyan word "Whilamut" is translated into English as "where the river ripples and runs fast."

The purpose of the project is to provide a historical appreciation of the early inhabitants of this area. Kalapuya Elder Esther Stutzman and the Kommema Cultural Protection Association consulted on the project to determine names and appropriate stone locations. The project also provides a link between Eugene and Springfield, which share this riverfront parkland.

Download a map and brochure about the Talking Stones.

Restoration efforts are underway in the Whilamut Natural Area. Blackberries are being managed and native vegetation is being planted along portions of the Willamette River. Since 2001, Eugene volunteers have planted almost 800 feet of Willamette River bank with native shrubs and trees such as cottonwood, alder, bigleaf maple, willow, and red twig dogwood. Future planting efforts are planned to continue improving and diversifying the habitat along the Willamette River as it flows through Alton Baker Park. For information on how to get involved, contact Volunteer Coordinator Carrie Karl at 541-682-4850.

For more information about the Whilamut Natural Area, please contact:

Short URL to this page: www.eugene-or.gov/whilamut