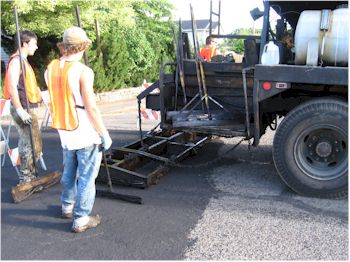 A slurry seal is a thin layer of asphalt emulsion, rock and sand. Slurry seals are used to seal the existing pavement against intrusion of water, fill in small cracks, provide a uniform surface and restore surface friction, which improves drivability and skid resistance. Slurry seals are beneficial on streets with older pavement, or where surface material has begun to wear off leaving a rough surface. They protect pavement from oxidation, which leads to brittleness and cracking, and keep water out of the road base by sealing existing cracks. Since slurry seals do not add any structural value to a street they are best used on local streets or collector streets with little structural damage and where regular truck traffic is not expected.

Due to the small amount of materials needed and the quick application time (usually one day), slurry seals provide a very cost effective way to extend the life of our pavements. The average cost of a slurry seal is about one-tenth of an asphalt overlay and one-fiftieth of total reconstruction costs.

Here’s how a slurry seal project is typically done in several phases:

Approximately 11 street segments in several areas of the city are scheduled to receive slurry seal treatments in 2018: